Yesterday, PETA struck again. This time they are attempting to slander a family farm in North Carolina. Blogger and dairy farmer, Dairy Carrie wrote an excellent blog explaining the truth behind the video. If you know anyone who believes that PETA’s work is beneficial to the welfare of animals or worse, they believe PETA speaks the truth, share this blog and shine a light on all the manure PETA spreads!

Periodically, the Alliance will be highlighting bloggers within the agricultural community. Dairy Carrie is an awesome example of a farmer and advocator for agriculture!

This afternoon I got an email about a new video that the People For Ethical Animals (PETA) had posted on their social media sites. My first thought was to roll my eyes, PETA isn’t exactly known to be the sane voice in animal welfare or even animal rights for that matter, but never the less I went and watched the video.

After watching the video for the first time I was disgusted! The video shows cows slogging through incredibly deep manure. Their legs are dirty and the amount of manure in the barn is unbelievable!

I started talking to other dairy farmers about this video and how there was absolutely no defending it when I realized something… The barn they show really is unbelievably dirty… as in so dirty that you have to ask yourself if what they are showing you is really real. 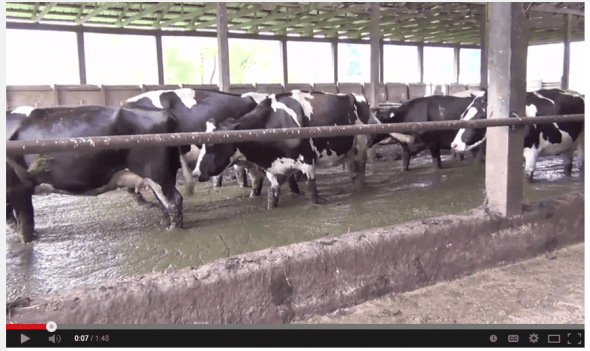 I see a lot of manure, I see cows with dirty legs. But I see something else, something that most people that aren’t around cows wouldn’t even think about or notice…

Our cows live in a “freestall” barn like this. The cows lay in a stall with their butt towards the alley. The alley is about 6 inches lower than the stalls the cows lay in. This is designed this way so that when a cow poops (remember cows have no problem pooping while laying down) the poop falls away from the cow and her udder. 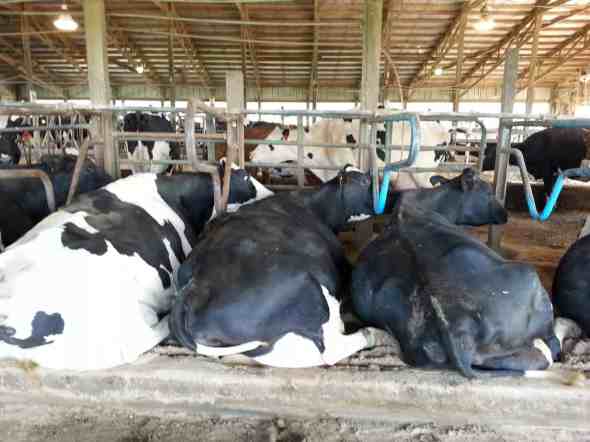 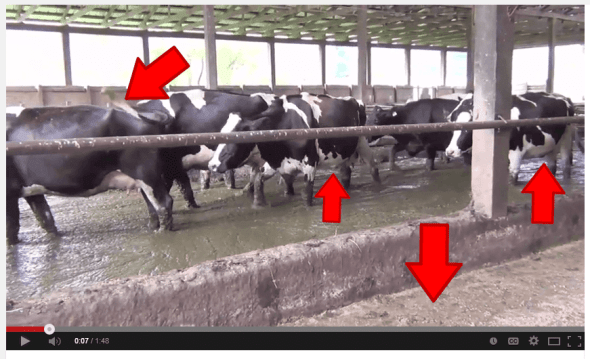 When I look beyond the manure I see a group of cows that are clean when if they were living in this barn they would be filthy from head to toe. I see a feed area with not a scrap of feed in it and my experience in dealing with manure tells me that this stuff has been moved around recently. While I don’t know this farmer and I don’t know the story about what’s going on here, to me it looks like these cows were paraded through this area for the purpose of making this video. The lack of feed in the feed area, coupled with the amount of manure makes me wonder if this part of the barn was being used for temporary manure storage rather than to house cows. That may be odd but it’s not abusive to the cows! 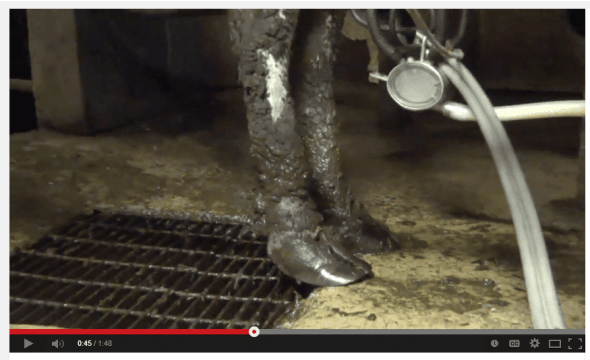 Ok Mr. Voiceover man, this is kinda silly. I’m guessing that you didn’t ask the farmer about this cow. Maybe you tried asking the cow herself how she would like to be addressed?
This is like taking a photo of a guy waiting at the DMV and saying “This man only identified as 463, by the number in his hand.”… If you asked me I could tell you everything about my cows, from their name to who their mother and grandmother is but if you walked onto my farm you would see numbers in their ears. 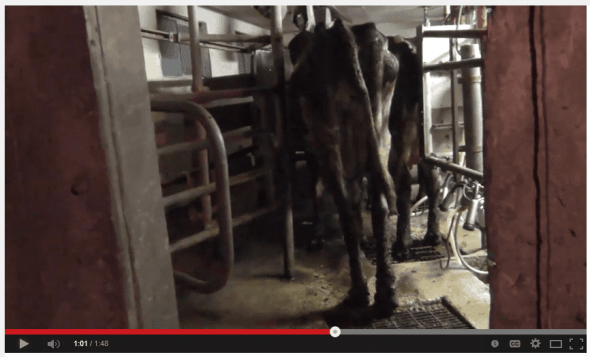 Here Mr. Voiceover man says that this cow is clearly emaciated because you can see her bones. I’ve covered this topic already HERE. The cliff notes version is that unless a cow is morbidly obese, you will always see it’s hip bones. This is how cows are built, they are not hippos nor should anyone expect them to look like hippos!

The voice over in the video calls this farm a “Dairy Factory” however from what I can see in the video, their milking parlor is smaller than ours, meaning that they aren’t set up to milk a lot of cows. 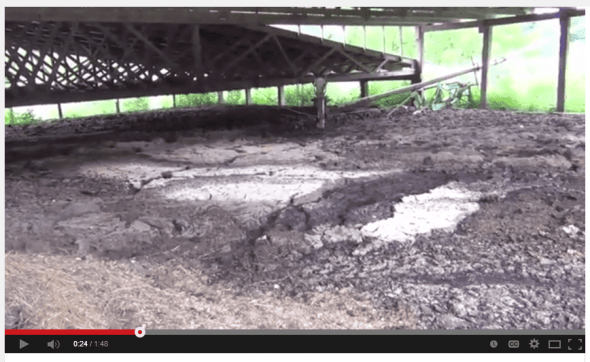 This manure pit looks pretty dang full to me. Mr Voiceover man tells us that it’s been sitting so long that the top hardened. Well, first of all, the point of having a manure pit is for it to contain manure until the farmer is able to haul the manure out without having to worry about runoff from heavy rains or snow melt. I wrote about how farmers handle manure HERE. Secondly, this manure pit is under a roof. This allows the farmer to divert rainwater from the manure pit, that’s a good thing! That would also explain why the top of the pit is dry. 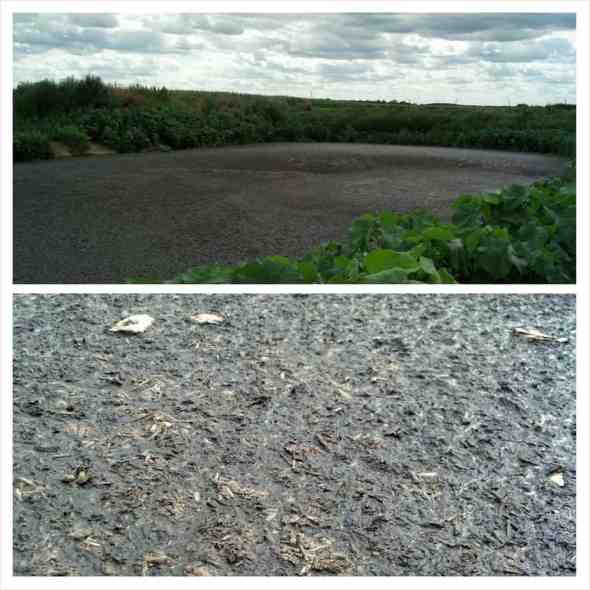 PETA almost tricked me with this one. I watched the video and was ready to go and kick this farmer’s butt myself. If this video really showed what it says it shows the line of dairy farmers wanting to make sure this farm went out of business would stretch for miles. Nobody wants to see cows kept in conditions like this, especially dairy farmers.  I can totally understand how many people will watch this and walk away with a bad impression of not just this farm but all farms.

Of course that’s what PETA wants. As they say in the video, they want you to to go vegan. PETA claims that the milk from this farm went to Harris Teeter stores, however the milk company that buys milk from this farm has said that is incorrect. Considering PETA’s track record on getting their facts right, that’s not very surprising.

I don’t know what the full story is here and I’ll certainly do more checking but I feel confident that what the video is trying to show isn’t how things really are. If I find more information out, I’ll update this post.

I’m glad I took the time to watch this video again and see the real story. Unfortunately the Associated Press picked this story up this afternoon and sent it out to thousands of newspapers and television statements. Because of that, dairy farmers like myself get an undeserved black eye and now have a huge hill to climb to get the correct information out.  I hope you’ll share this post with your friends and not let PETA pull the wool over more people’s eyes.

To read more from Dairy Carrie visit her blog at http://dairycarrie.com/